These data were compiled as the basis for a new account of the urbanism of the Roman world in the imperial period. The data consists of a new catalogue of sites with urban characteristics in the Roman Empire between 100 B.C. and A.D. 300, which includes information about their locations and date-ranges, as well as offering new estimates of the sizes of their inhabited areas and bringing together existing evidence for their monuments and civic status for the first time.

This material was originally assembled for a D.Phil. at the University of Oxford, which has now been published as a monograph (Hanson 2016a; 2016b). More information about how urbanism was defined, how the catalogue was compiled, how the size of the inhabited area of each site was measured, and other details can be found in the same works.

This Cities Database should be cited as:

If you would like to use this material, please cite both Jack Hanson's monograph and this database. 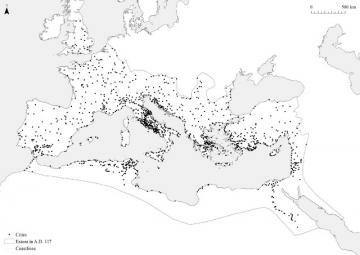