The Stone Quarries Database was compiled by Ben Russell as part of his research project on Sculpted Stone and the Roman Economy. The database comes in two forms - an online version that can be queried through the above table view, and a downloadable PDF including a full gazetteer of quarry sites, and some introductory notes.

The database includes all those quarries at which activity in the Roman period is proven or suspected. As such it builds on the ground-breaking studies of A. Dworakowska (especially Quarries in the Roman Provinces (Warsaw: Zaklad Narodowy, 1983)) and those by F. Braemer. It is intended to be used in conjunction with B. Russell, The Economics of the Roman Stone Trade (Oxford: OUP, 2013), Chapter 3 of which focuses on the overall distribution and chronology of the quarries listed in this database.

This database comes with several caveats. First, it is far from a complete record of all quarries in the Roman world. Included are those sites that are mentioned in publications but there must have been hundreds if not thousands of other quarries that have yet to be documented in any way. Second, the sites listed in this database vary considerably in size: some are very large (Marmara Adası and Penteli, for example) while most are quite small; those attempting to draw conclusions about the distribution of quarrying on the basis of this database alone should bear this in mind. Third, for the sake of ease, the materials listed at each site have been simplified, so that ‘marble’ covers a range of lithotypes, some of which are fully metamorphosed marbles proper and others of which are breccias or recrystallized limestones capable of taking a polish which were treated as marbles in the Roman period. Fourth, dating these quarries to specific periods within the Roman era is usually very difficult and so has been largely avoided. Finally, the coordinates given for each site, included in full in the PDF version of the database, are approximate. Descriptions of the location of quarries are often too vague to allow their location to be pinpointed. The coordinates, therefore, are usually accurate to within several kilometres and suitable for general mapping purposes only.

A print version of this database (Version 1.0) can be downloaded in PDF form 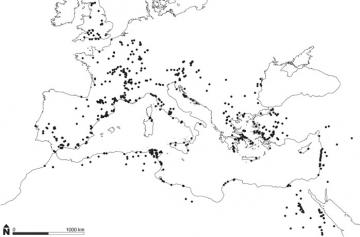