Coinage and the Roman economy in the Antonine period: the view from Egypt

The Antonine period and the Antonine period in Egypt in particular have become central to current studies of the Roman economy. There is the debate between Wilson and Scheidel about whether per capita Roman economic growth continued throughout the first two centuries AD or stagnated already from the Augustan period. There is also Rathbone’s study of Egyptian prices, the only useable series from anywhere in the Empire, which sees the doubling between AD 160 and 190 as the only significant change between AD 45 and AD 274/5. This picture underpins an important paper by Temin on the causes of inflation in the Roman World in general.

The Antonine Plague, the impact of which is measured most securely from Egyptian evidence, potentially assumes great importance here: identified by Rathbone and Temin as the exogenous shock that caused the structural shift in prices and by Wilson as that which ended economic growth. The Plague has loomed large over recent discussions of the economy. It is obvious that thinking has been influenced by the much better documented Black Death. Unfortunately, attempts to substantiate the impact of the Plague in documentary and epigraphic evidence have been shown to be ‘Not Proven’. (Note Greenberg’s delightfully titled ‘Plagued by doubt’.) Modern estimates range from slight to apocalyptic. Even in Egypt, with its unparalleled level of papyrological documentation, attempts to pin quantified socio-economic change on the Plague have proved hard to sustain. At least the severity of the Plague itself in Egypt does seem to command a degree of consensus:

‘No one disputes that the Antonine Plague, which was carried into Egypt in AD 166/7, caused over the next decade a dramatic aggregate population loss, probably of around 20–30 percent to judge from some attested cases . . .’ (Rathbone 2007: 700)

It is indeed plausible that Egypt was badly hit by a plague spreading from the East. Alexandria, as a major maritime city, would have been a magnet, the province was heavily urbanized and densely populated, and the Nile would have been an effective conduit. The earliest evidence adduced by Duncan-Jones for an impact on Egypt is in AD 167/8.

Quantification of fish-salting infrastructure capacity in the Roman world

The Roman empire saw extensive export of salted fish, and the sauces derived from them  garum, liquamen, muria and allec - were used widely in cooking, acting as a flavour enhancer. Several amphora types used for salted fish or for derivative sauces have been identified, especially from Spain and Morocco, and are widely distributed. However, a relative lack of work on amphorae carrying fish products made elsewhere in the Roman world hampers attempts to track the development of trade in salted fish in any quantitative manner. In addition, some regions which produced salted fish seem to have exported it in barrels, which are much less archaeologically durable.

However, it is possible to gain some idea of the scale and development of the trade by analysis of the factories where the fish were salted and the sauces produced. These have large concrete vats, in which the fish were put alternately with layers of salt, and left for days or weeks to absorb the salt by osmosis. The guts and small fry would be mulched down to create the sauces garum and liquamen, perhaps with other flavourings added. Although they have often attracted more attention in ancient and modern literature, garum and liquamen were in a sense a by-product of a much larger fish-salting industry.

Quantification of the available vat capacity for salting in use at particular periods could allow a general sketch of the growth and shrinkage of the fish-salting industry during the Roman and late Roman periods. The technology of salting vats can be traced back to the 5th c. BC, when small Punic vats are known from the bay of Cadiz. However, the construction of factories with batteries of concrete vats is clearly a Roman phenomenon, reflecting a veritable fish-processing industry (the word, for once, is appropriate) on a far larger scale than the probably largely pithos-based production of the Greek and Punic worlds. The intensity of exploitation suggested by the processing structures is echoed in the reduced size of fish specimens during the Roman period. The emergence of built vats and factories is linked to the development of empire-wide Roman markets, and the comparable chronological trajectories of the industry in several different areas of the empire, although nuanced by local factors, suggest that the industry may serve as an empire-wide indicator of economic fortunes.

The uptake of mechanical technology in the ancient world: the water-mill

The water-mill is one of the earliest examples of human efforts to harness natural forces to do mechanical work, and stands as the ancestor of a long line of machines. Water-milling greatly increased per capita productivity in the time-consuming and widely needed grinding of grain into flour, and enabled greater specialisation in labour, with the water-miller (molendinarius) emerging as a separate figure from the miller-baker (pistor) of the earlier Roman period. The spread and uptake of the water-mill is therefore important to questions of economic development and the relationship of capital investment in technology to economic growth (Wilson 2002).

In 1984 Örjan Wikander published a brief but important landmark study which overturned the commonly-accepted idea that although the ancient world knew the water-mill, it was not until the early middle ages that its use became common (Wikander 1984). He showed that the large number of references to early medieval water-mills in surviving documents is a function of the nature of our sources. Much surviving Greco-Roman literature is epic, didactic or elegiac poetry, narrative history, tragedy or philosophy, none of which is likely to spend much time discussing water-mills. The bulk of the references we do have come from scientific, technical or encyclopaedic writings, which are comparatively rare. The massive increase in the rate of references to water-mills in written documents of the fourth and fifth centuries AD coincides with the introduction of new genres of writing – legal codes, hagiography, and monastic charters, all of which are much more likely to refer to such relatively mundane devices. By contrast, the bulk of the archaeological material known in 1984 came from the second and third centuries AD, when no literary sources refer to water-mills at all – a reflection of the relatively small number of texts that have survived from this period. Two conclusions follow from the different pictures presented by the documentary and archaeological sources. First, the documentary sources cannot by themselves provide a guide to the relative frequency over time of the use of water-power. Secondly, the large number of documentary references to water-mills in the early middle ages, a time when the archaeological record is sparse, indicate that the archaeologically identified record must represent only a very small fraction of the original total.

As we know, the papyri of Egypt offer the historian of the ancient economy valuable evidence for a wide range of issues. One such central issue is transport, and it is problematic – Peter Brunt described it as’ the greatest failure of ancient technology’. The primitivist approach to the economy, advocated most vigorously by Finley, Jones, Duncan-Jones and others, holds that trade and transport was held back by two main factors: firstly, a lack of incentive to trade due to regions having the same needs and surpluses, and secondly, the high cost of transport – especially by land. Using the evidence of Roman agronomists and the costs of transport established by Diocletian’s Edict of Maximal Prices, Jones stated that it was ‘cheaper to ship grain from one end of the Mediterranean to the other than to cart it 75 miles’. The cost of transporting a mill 25 miles was 11% of its value, rising to 39% for 75 miles (Cato, Agr. 22. 3). Pliny’s well-known letter (Ep. 10. 41) on transport in Nicomedia makes the higher cost of land transport over water seem clear. Any attempt to challenge these ideas was met with force: in Brunt’s review, he criticizes Alison Burford’s paper on the transport of bulky goods, saying: ‘she merely showed what governments could do, regardless of cost, for defence, prestige or piety; it was no more possible for private entrepreneurs to emulate them than for IBM to put men on the moon’.

But the Egyptian evidence offers a rich picture of transport, which challenges strongly the pre-conceived ideas of Finley and his followers. The economic reality of transport was much more complex. Typically, though, the evidence at our disposal raises as many questions as answers (or partially-answers). Here, I set out some general bibliography on transport, and points of detail aspects of transport and the economy for which the papyri offer potentially quantifiable evidence. This might suggest ways in which we can answer some of the main questions we would like to ask, and serve to identify points where our evidence either falls short of an answer or where other complexities serve to obscure. 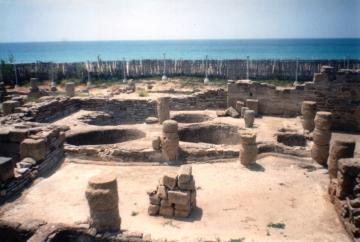